A long time ago, years before Elon Musk reached for the stars with his Space X project, a young man had his own childhood dream about a journey into space. Fly Rocket Fly tells the fantastic story of German astrophysicist Lutz Kayser who developed the world's first private space company. He did this under the curious and concerned eyes of secret services around the world. A compelling documentary adventure that reads like a film script. 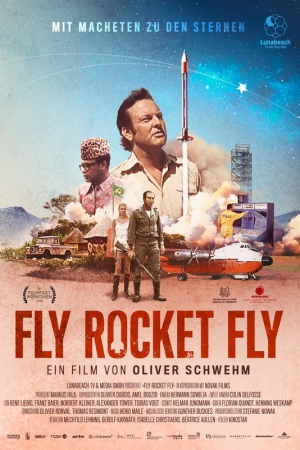 1975, Lutz Kayser and a dedicated group of engineers have big plans. They are working together on a missile technology based on affordable materials. They set up OTRAG (Orbital Transport and Rockets Inc.), the world's first private space travel company. But Kayser has a problem: he is not allowed to test his rockets in Europe. His search for a suitable development location leads him to then dictator of Zaire, Mobutu Sese Seko. Mobutu agrees with Kayser's plans, but the international security services are not on board. After all, since the Second World War no-one wants to see any German rockets being launched. Yet Kayser signs a contract between OTRAG and Zaire in which he can make unlimited use of 100,000 km² of territory to launch and test his rockets. This creates a lot of tension between a troubled outside world and the German rocket scientists. With fascinating archive material, private videos and interviews, director Oliver Schwehm tells this crazy story as a true political thriller full of adventure.