In 1992, an explosive cocktail of structurally unpunished police brutality and racial tension resulted in deadly riots lasting six days. The concrete reason for the riots was the acquittal of the officers who arrested taxi driver Rodney King with extreme violence. 25 years later, directors Daniel Lindsay and T. J. Martin reflect on these traumatic events for National Geographic through archival footage, news items and unseen footage. 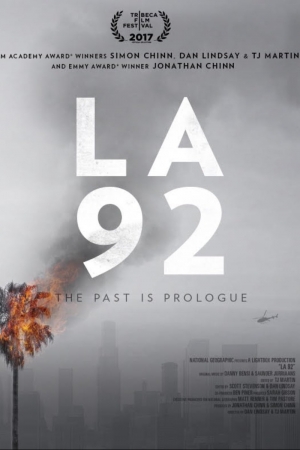 March 3, 1991. Four white police officers brutally beat up black, unarmed taxi driver Rodney King during his arrest. The violence is filmed by a resident on the other side of the street. March 16, 1991. A Korean shopkeeper shoots and kills Latasha Harlin, a 15-year-old black girl, over suspicion of stealing a bottle of orange juice. A year later on April 21, 1992, a white judge ensures that she gets a reduced sentence. On April 29, the four white officers who assaulted Rodney King were acquitted by a mostly white jury. The verdict became the proverbial last straw and that same day, a peaceful protest escalated to days of violence, looting and arson in southern Los Angeles. Officers were ordered not to take any action. In the north, the streets between Koreatown and the wealthy white neighborhoods were closed by police. Left to their own devices, Korean shop owners staged their own armed defense. Nearly half of the billions in damage was suffered by the Korean community. Of the more than 60 dead, a third was Latino. In total, nearly 2400 were injured. On May 1, King asked for an end to the violence. Three days later, the riots officially end.