Writer Sylvain Tesson and renowned wildlife photographer Vincent Munier travel to the Tibetan plateau in search of one of the most shy animals on earth: the snow leopard. During the long wait in arctic temperatures, Tesson wonders who is watching who. Director Marie Amiguet manages to translate the story of the quest into delightful images, the soundtrack by Warren Ellis and Nick Cave make the film a hypnotic viewing experience. 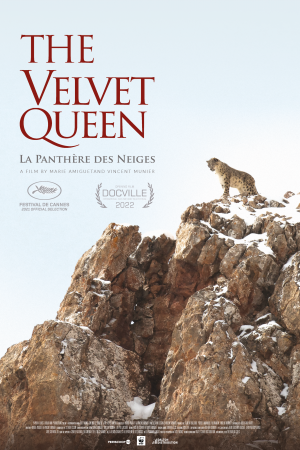 The Tibetan Plateau is a picturesquely beautiful but inhospitable area that is literally breathtaking, with its altitude of 4,500 meters. It is home to some nomadic tribes who live in harmony with rare animal species such as the manoel and the wild yak. Acclaimed wildlife photographer Vincent Munier has gone there many times to photograph the unique animal species that live there. But there is one animal he was never able to shoot: the extremely shy and endangered snow leopard. Together with writer Sylvain Tesson, he sets out on a quest through the desolate and icy but beautiful landscape. The Velvet Queen transcends the ordinary nature film thanks to Tesson's poetic musings about the relationship between man and nature in this contemporary society and the art of looking – and being watched. The snow leopard is a master of camouflage and has spotted the duo long before they even realize it. Director Marie Amiguet captures the friends' quest with an eye for natural beauty and a touch of humor that puts things into perspective. The score by Warren Ellis and Nick Cave makes the film a hypnotic viewing experience.

The screening on 23.03 is part of the Opening Night and will be followed by a Q&A with the directors..