At the start of the summer, two boys go to work in a gigantic all-inclusive hotel on the Turkish Riviera. They find themselves in a world of colorful swimming suits, lavish buffets and veiled power relations and gradually discover the possibilities of getting ahead in life. A sun-drenched portrait of two young men in search of a better life. But soon they ask themselves the question: which dreams are really worth chasing? 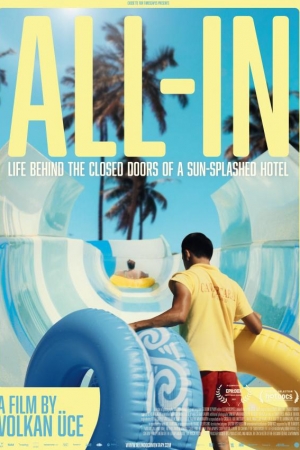 For Ismail and Hakan, there are few options for getting ahead in life. One of them is doing seasonal work in one of the many all-in hotels in the Turkish Riviera. Ismail is 18 and dropped out of school to earn money for his family. He dreams of a job as a hairdresser but is hired as a kitchen helper. Hakan is 25 and the youngest of twelve children. He too has stopped studying and hopes to overcome his social anxiety in the hotel. He is appointed as a lifeguard in the hotel's aqua park. Initially, the two boys are very impressed: they avoid any contact with the hotel guests and they can hardly believe the colorful swimming suits and the half-eaten plates. As the friendship between Ismail and Hakan grows, it becomes clear how different they are. As he watches the guests from behind his buffet, Ismail's hunger to explore the Western world only seems to increase. But Hakan struggles with being ‘the nobody’ the hotel world demands him to be. He tries in vain to discuss Pushkin and Dostoevsky with the Russian tourists. But is it possible to put your identity aside for the money? And who can be an example for whom here? ALL-IN shows the loss of innocence against the backdrop of a fading European dream. The initial friendliness turns to indifference as Ismail's and Hakan's initiation into the absurd world of Western tourism soon leads them to this question: which dreams are really worth pursuing?


Other cultures Economy Coming of age

Is followed by a Q&A with the director.