A lengthy interview with maestro Ennio Morricone is the basis for this portrait of the extraordinary life and work of the legendary Italian composer. He wrote iconic film scores for classics such as 'The Good, the Bad, and the Ugly', 'The Mission' and 'The Untouchables'. 'Ennio' offers a rare glimpse into the mind of a musical genius. A compelling documentary in which the interview is richly supplemented with archive footage and memories of colleagues and filmmakers such as Clint Eastwood, Quentin Tarantino, Bruce Springsteen and Hans Zimmer. 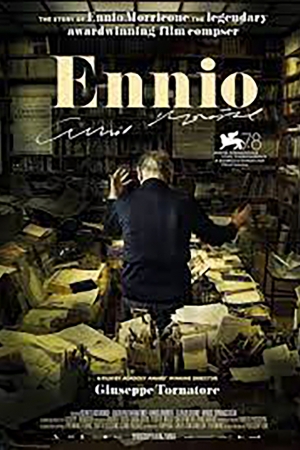 He composed many unforgettable scores that everyone can whistle along to, but he would have preferred to become a doctor. At the urging of his father, young Ennio Morricone enrolled at the music academy to become a trumpet player. Gradually he would focus more on composition. In a long interview, maestro Ennio Morricone himself shares how, as a trained composer, he gradually became more and more involved in writing film scores. He also composed experimental, abstract pieces of music, fragments of which can be found in his scores. Thanks to the collaboration with Sergio Leone, he became a household name and composed up to 25 scores a year. Director Guiseppe Tornatore, with whom Ennio had a kind of father-son relationship and for whom he wrote numerous scores, delivers an impressive portrait of a true musical genius in which a long interview with the maestro is interspersed with unique archive images, numerous film fragments and memories of colleagues and filmmakers such as Clint Eastwood, Dario Argento, Barry Levinson, Roland Joffé, Oliver Stone, Quentin Tarantino, Bruce Springsteen and Hans Zimmer.