Over the course of 12 years Liu Bing filmed himself and two of his skater friends. Over the course of the 12 years the gap between youth and adulthood, between boy and man, is inevitably bridged. An authentic documentary that was bombarded with prizes. An ode to being young, growing up, chasing dreams and letting go of certain hopes. 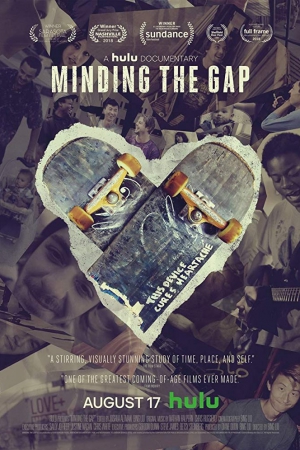 Three high school friends grow up in the heart of the American Rust Belt. Growing up here usually means a future of unemployment, poverty, addiction and violence. These friends find an outlet in skateboarding. One of them, Liu Bing, films all of their adventures and records how they inevitably tumble into adulthood: they find jobs, get steady relationships, have children ... Years later, he returns to his birthplace to see what has become of his friends. Minding the Gap has won countless international prizes and was unanimously honored for its authenticity. Director Liu Bing is not an outsider, but sits in the middle of this unique registration of the big leap across the gap from youth to adulthood, from boy to man. A jump with a lot of pitfalls in between.