Mr. Bachmann and His ClassMaria Speth

His students are between twelve and fourteen years old, they come from more than twelve countries, some barely speak German. But Master Bachmann looks for that which unites them, he stimulates their imagination and inspires with music and language. His job is not only to teach these youngsters the necessary dose of mathematics, language and science, he also has to prepare them for the next grade and by extension, life. This Silver Bear winner is a warm tribute to the kind of teacher you wish every child. 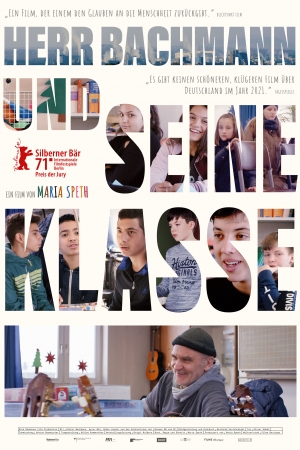 Stadtallendorf, a German factory town of about 20,000 inhabitants, was chosen by the Nazis during the Second World War to build their weapons factories. Some 17,000 forced laborers were brought to the city. After the war, the industry remained intact and Polish and Turkish guest workers were added. Today 70% of the inhabitants have a migration background. This exceptionally diverse mix can also be found in master Bachmann's class. His students are between 12 and 14 years old, they come from more than 12 countries, some barely speak German. Bachmann's task is not only to teach these young people the necessary dose of mathematics, language and science, he also has to prepare them for the next grade and by extension, life. He does this with a lot of patience, fantasy, music and above all: love for the profession. Mr. Bachmann and His Class is a monumental portrait that doesn’t bore for a moment, and a hopeful look at tomorrow's society.